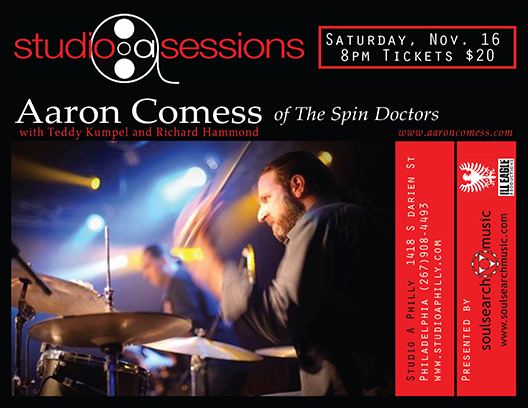 The third featured artist in the "Studio A Sessions series is world famous Spin Doctors drummer Aaron Comess who will be performing with his own super trio on Saturday, November 16 at 8 pm. Besides being a founding member of the Grammy nominated, ten million plus album selling Spin Doctors, Comess is a brilliant composer, producer and multi-instrumentalist. He is also the owner of His House Studio in New York City. He has played on, written on and/or produced over 200 albums with an acclaimed and diverse roster of artists such as Joan Osborne, Edie Brikell, Marc Cohn, Isaac Hayes, Aaron Neville, Chris Whitley, Rachael Yamagata and many, many others. Comess will be appearing with guitar maestro Teddy Kumpel, who has worked with Rickie Lee Jones, Nine Inch Nails and Marshall Crenshaw among many others. The anchor is bassist Richard Hammond, who has worked with Bono & The Edge, Carlos Santana, Levon Helm, Joan Osborne, Patti Austin and many more. Comess will be performing music from his critically acclaimed solo albums Catskills Cry and Beautiful Mistake, which includes some of his most personal and original music to date. 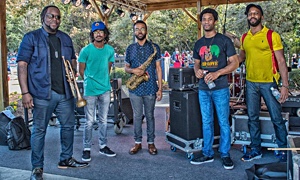 Marquis Hill at the Attucks Theatre 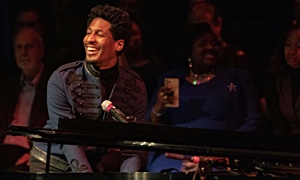 Jon Batiste in Concert at Sandler Center for the Arts 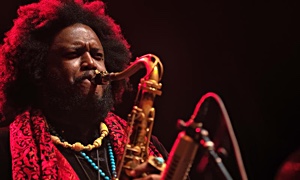 Kamasi Washington at the NorVa 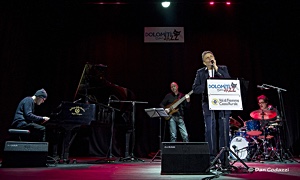