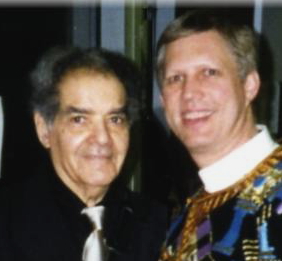 Wasserman first heard George Russell's compositions and arrangements on the 1959 Decca Records LP "New York, N.Y." and made the decision to move to Boston in 1978 to enroll at the New England Conservatory of Music (NEC) with the definitive aim of apprenticing under the guidance of George Russell, a long-standing Department of Jazz Studies faculty member. He performed an original solo piano medley arrangement of Billy Strayhorn compositions in person for Maestro Russell as his entrance audition in Boston, and was approved as a full-time student in the Jazz Composition Division due to Russell's written evaluation endorsement, which declared "applicant accepted: good sense of harmony and orchestration." While attending NEC, Wasserman interned as a substitute instructor for Mr. Russell’s classes in the Lydian Chromatic Concept whenever the Russell's “Living Time Orchestra” was on international concert tours and carried out a variety of publishing responsibilities as an editorial assistant for the fourth and final edition of "The Concept." He received his Bachelor of Music in Jazz Composition as a protege of Mr. Russell in 1982 along with a certification directly from George Russell to teach "The Concept" privately and in seminars. He has had the honor of assisting George and Alice Russell in preserving and propagating this exceedingly meaningful work ever since. Andy Wasserman is one of only a handful of people selected, certified and sanctioned by George Russell to represent his work exactly as he intended it to be taught and shared.