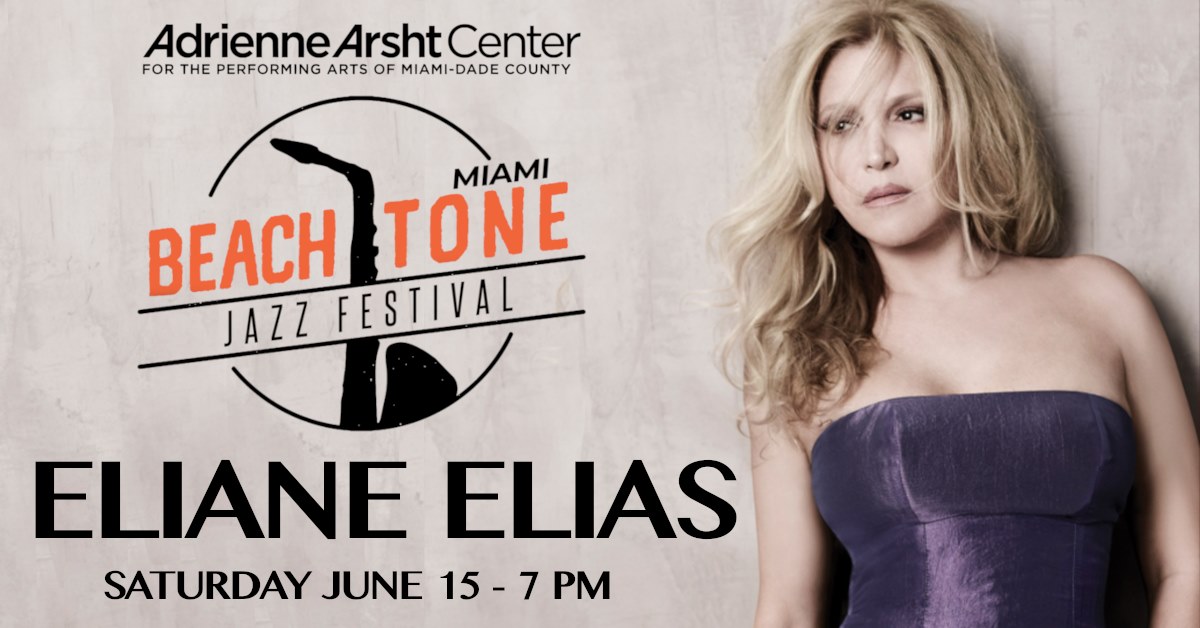 MIAMI BEACHTONE JAZZ FESTIVAL IS PROUD TO PRESENT Multiple GRAMMY® Winner ELIANE ELIAS YAMANDU COSTA & SAMMY FIGUEROA with special guests CHICO PINHEIRO & MIRELLA COSTA JUNE 15, 2019 8 PM KNIGHT CONCERT HALL AT THE ADRIENNE ARSHT CENTER Miami, FL (May 2019) – The Beachtone Jazz Festival celebrates its Miami debut on June 15th 2019 with one of the year’s most prestigious and exciting jazz event at Miami’s premier concert venue, the Knight Concert Hall at the Adrienne Arsht Center. Beachtone will be presenting three of the music world’s most exciting artists: multiple GRAMMY® winner Brazilian jazz artist Eliane Elias, fabulous guitar virtuoso Yamandu Costa and double GRAMMY® nominee and legendary percussionist Sammy Figueroa with two very special guests: GRAMMY® winning Brazilian guitarist Chico Pinheiro and LATIN GRAMMY® Cultural Foundation Award winner Brazilian singer Mirella Costa. This unprecedented roster captures the essence of Miami’s cultural medley while presenting world-class international artists. Brazilian pianist/vocalist Eliane Elias is known for her distinctive and immediately recognizable musical style which blends her Brazilian roots and her sensuous, alluring voice with her virtuosic piano playing. This multiple GRAMMY® Award winning artist has sold over 2.2 million albums during the span of her career and has over 30 million digital streams on Spotify alone. In addition to her nine Grammy nominations her album “Made In Brazil” won the Grammy for Best Latin Jazz Album, followed by ‘Dance of Time” which won a Latin Grammy for Best Latin Jazz Album. Her next album, a set of romantic classics recorded in Brazil and at London’s Abbey Road, is due for release in September 2019. The incredible guitar virtuoso Yamandu Costa is generally considered to be today’s foremost player of the Brazilian seven-stringed guitar. Although he is rooted in the Brazilian guitar tradition his music knows no borders and integrates everything from tango to jazz to classical. Alone on the stage, he invokes an ecstatic audience response with his spectacular, awe-inspiring musicianship. Well-known to Brazilian audiences, he has toured throughout the world, playing in over fifty countries, with a growing fame in the United States as audiences begin to discover this phenomenal Brazilian artist. Miami audiences need no introduction to multiple GRAMMY® nominated percussionist Sammy Figueroa. After a long and successful career as a sideman in New York, playing with everyone from Miles Davis to Mariah Carey to David Bowie, Sammy moved to South Florida and discovered a wealth of great musicians from all over the world. Forming his own band, the Latin Jazz Explosion, Sammy never looked back. Sammy and the Explosion have received two GRAMMY® nominations for Best Latin Jazz Album and have performed their sophisticated and original Latin jazz throughout the world. Joining Sammy will be acclaimed Brazilian jazz guitarist and GRAMMY® winner Chico Pinheiro and young Brazilian singer, Mirella Costa, winner of the LATIN GRAMMY® Cultural Foundation Award and a recent graduate from Berklee School of Music. The Beachtone Jazz Festival is the dream-child of Fernando Cutait, a Sao Paolo-based producer with a deep love of jazz. A musician himself and a graduate of Berklee School of Music, he says “It’s been my dream to present a jazz festival in Miami for over six years. One day I woke up and said to myself that the time has come.” For Cutait this is just the first production in Miami where he plans to create a base. The Beachtone Jazz Festival welcomes music lovers and jazz fans of all ages to enjoy this unprecedented musical experience! Ticket prices range from $55 to $135 and can be found at the Arsht Center box office or the Arsht Center’s website. Tickets can be ordered here. The Knight Concert Hall at the Arsht Center offers premium seating, dining options, a full bar, valet parking, ADA accessible accommodations and convenient digital ticketing on their website. To learn more about the festival, visit beachtonefestival.com. The Adrienne Arsht Center for the Performing Arts: 1300 Biscayne Blvd. Miami, Fl, 33132