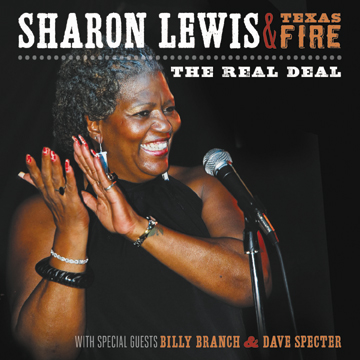 Sharon Lewis made her Delmark debut in 2007 as a special guest vocalist with Dave Specter on Live in Chicago (CD Delmark 794, DVD 1794). "...it's Sharon Lewis who provides the disc's most exciting moments. Her powerful pipes inject a strong gospel vibe into her originals "In Too Deep" and the head-turning ballad "Angel". -Blues Revue Born in Fort Worth, Texas Sharon's earliest musical experience was as a member of a gospel choir. She moved to Chicago permanently in 1975 and became active on the Chicago blues scene in the early 90s. In 2005 Sharon formed her own band, Texas Fire. The Real Deal features new Sharon Lewis original songs and a few covers of songs she often performs in her live shows like Van Morrison's "Crazy Love" and Bill Withers' "Ain't No Sunshine".